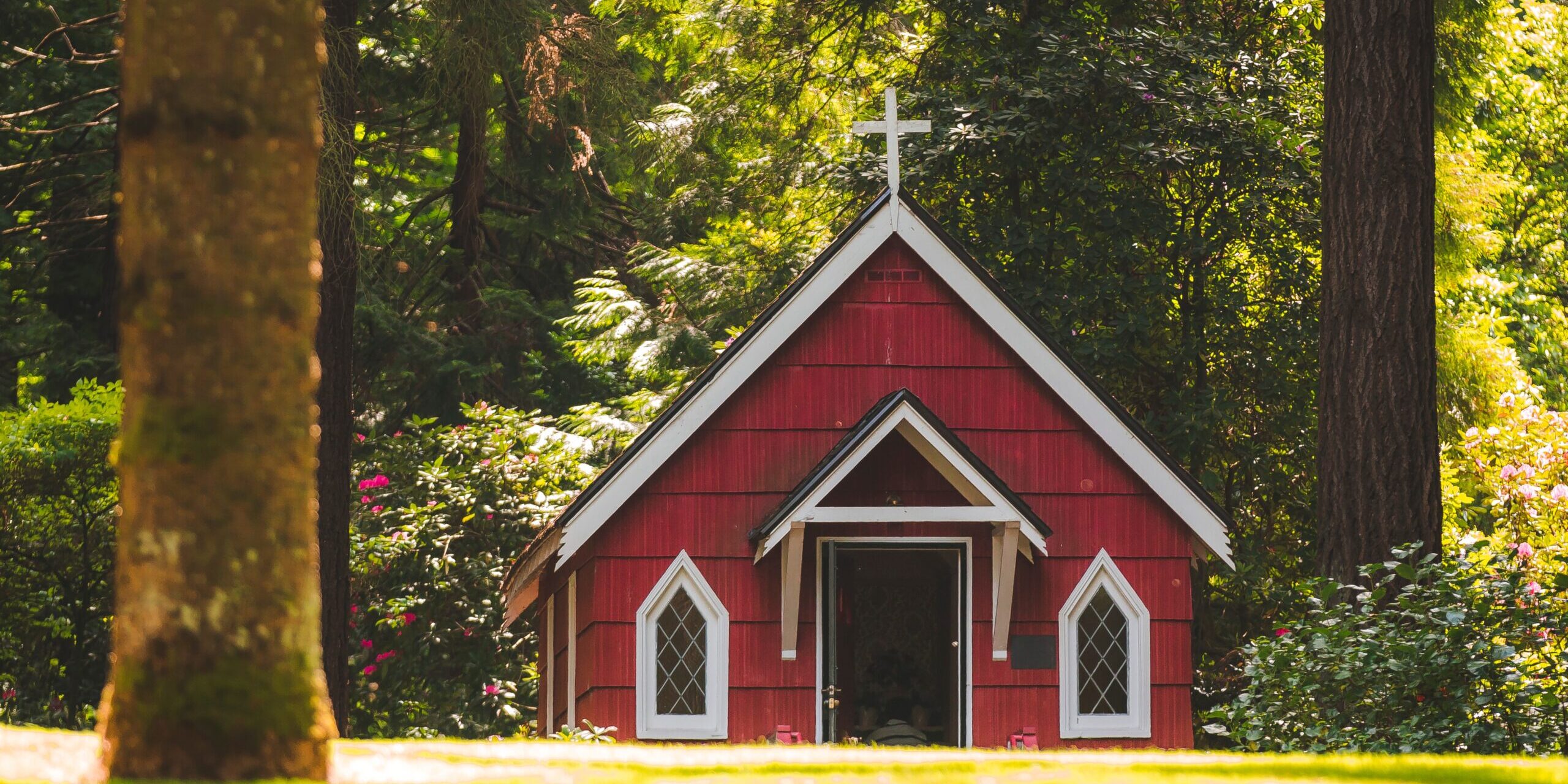 Smaller UMC congregations typically have smaller budgets, which means less money to pay their pastors and any other staff they may have. There are several ways in which United Methodist churches have typically handled this in recent decades.  In some cases, a full-time pastor serves multiple congregations, so that each congregation is effectively served part-time by their pastor.  In other instances, small congregations may be served by ordained pastors serving part-time, most notably by retired clergy.  In other cases, smaller congregations are assigned a pastor who does not have a traditional graduate-level seminary degree but has gone through an alternative credentialing process called Course of Study. These pastors, referred to as “local pastors,” may serve one congregation or multiple congregations that make up a pastoral charge. Still other churches may be served by certified lay ministers or other lay supply pastors who have more limited training. The trends in how United Methodist congregations, particularly small congregations, fill their pastoral positions have changed over the past two decades. Here is what we can learn: 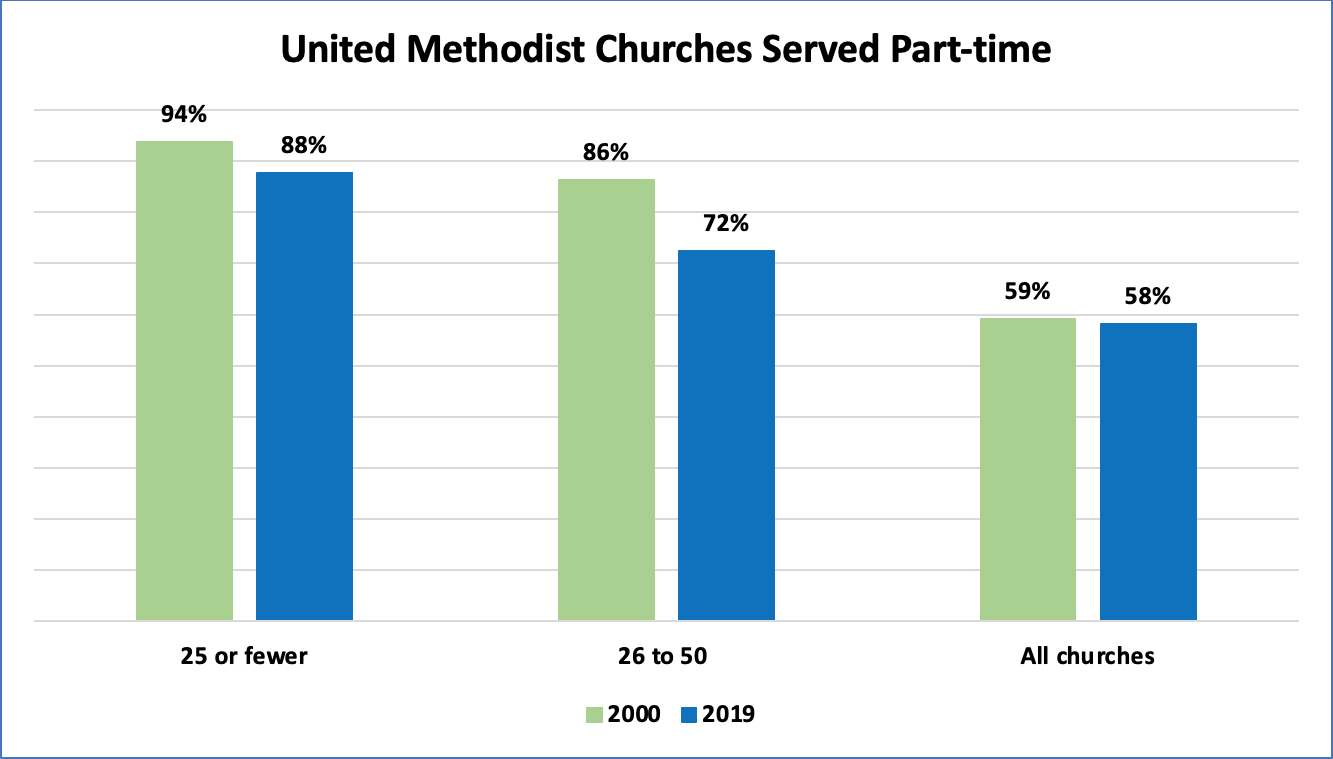 2. The percentage of the smallest UMC congregations that were served by a part-time pastor (either shared or not shared) increased between 2000 and 2019. 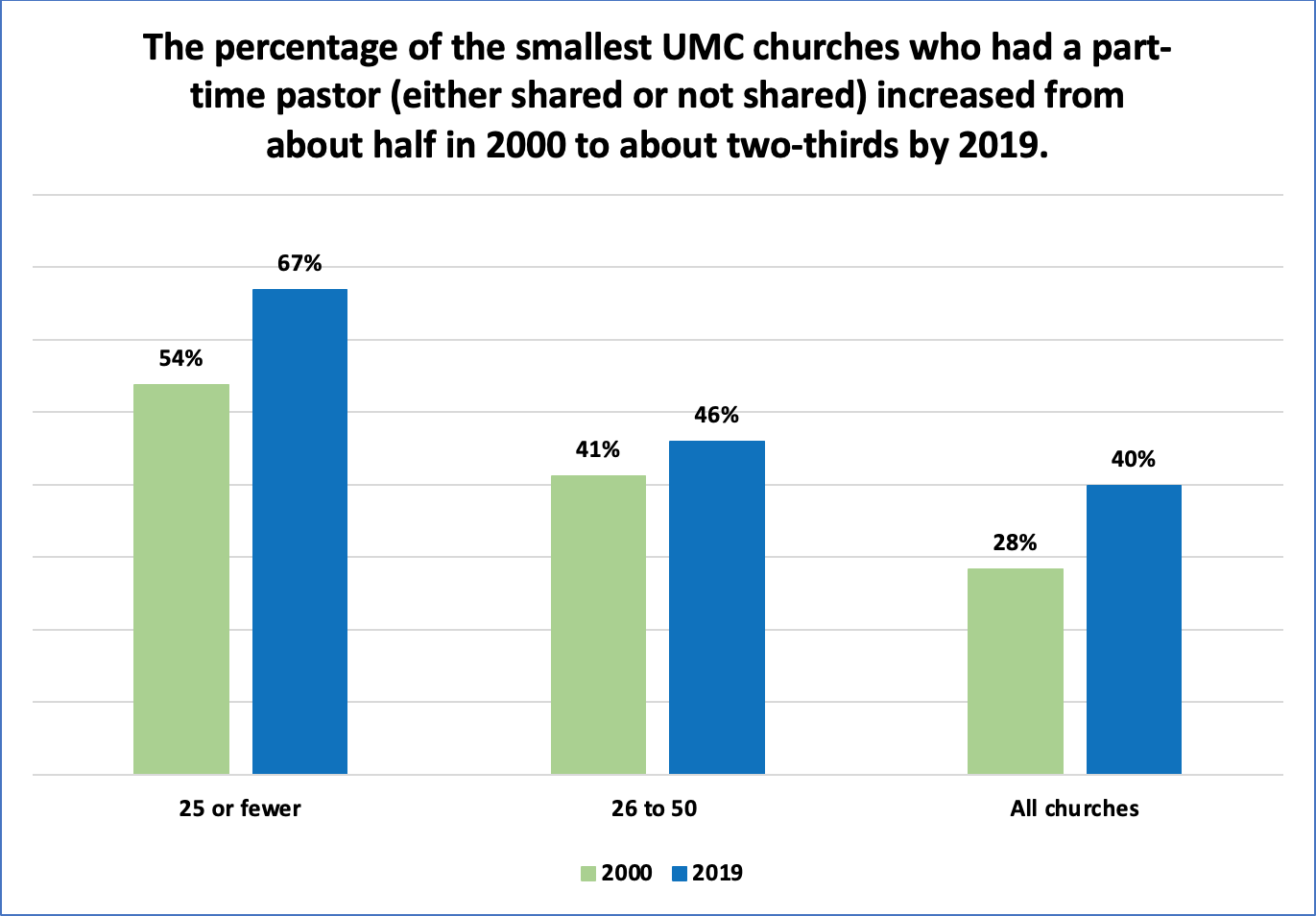 3. The percentage of small UMC congregations that shared their pastor with another congregation drastically decreased between 2000 and 2019. 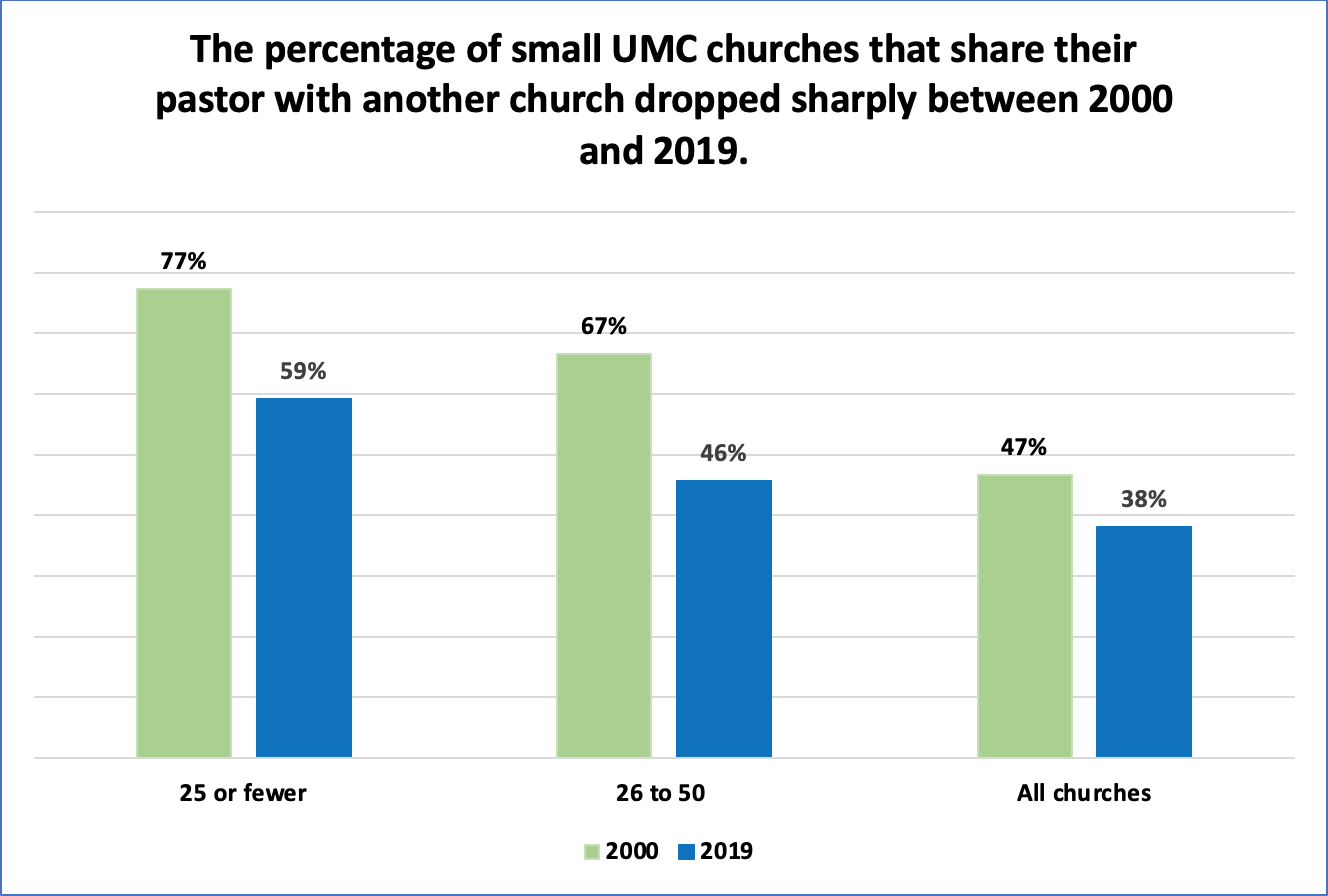 4. The share of small congregations (those with 50 or fewer in average worship attendance) that are led by a pastor with a traditional graduate-level seminary degree has decreased over the past two decades. 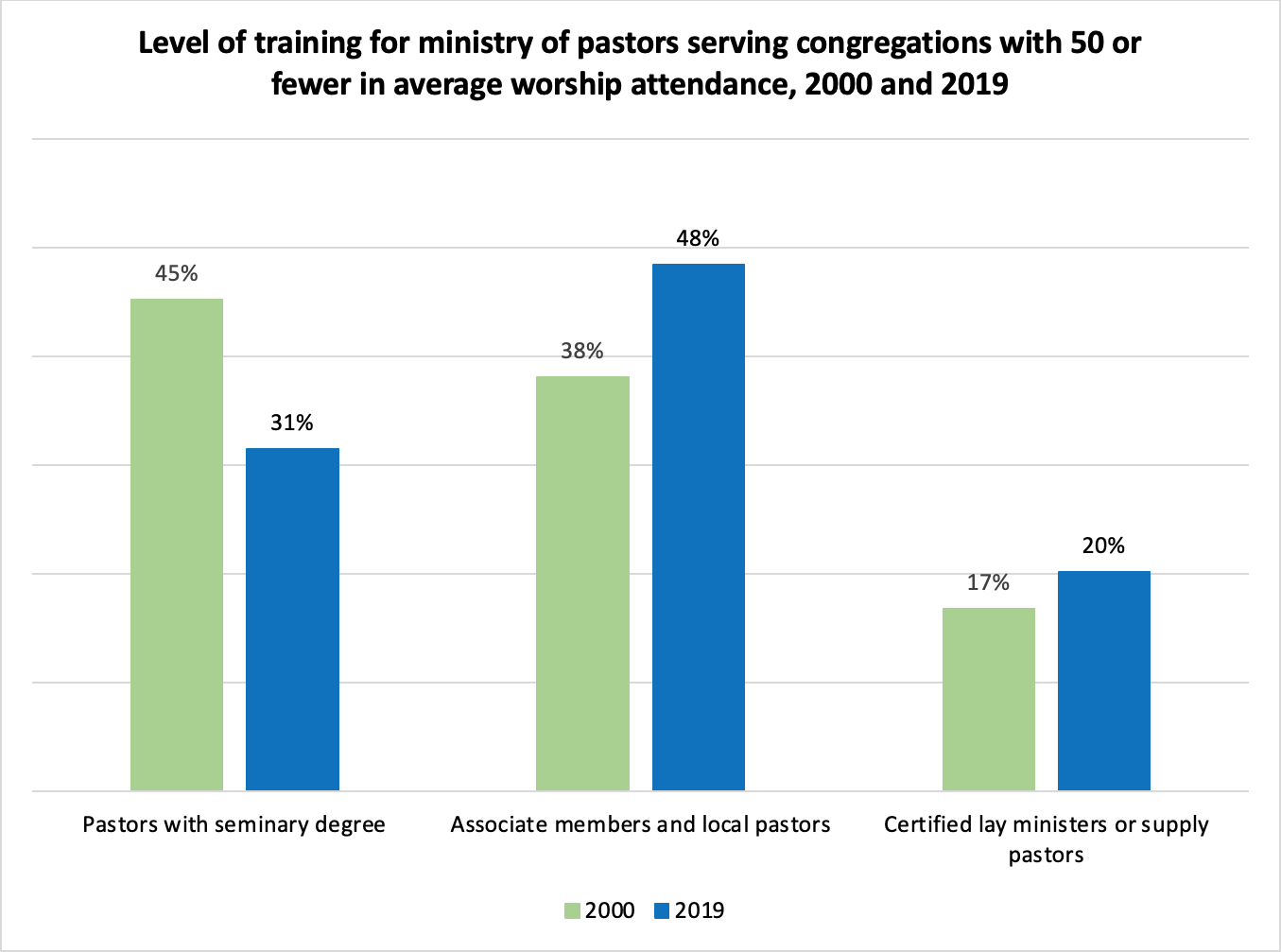 To summarize, there are more United Methodist congregations with 50 or fewer in average worship attendance today than two decades ago. The majority of these congregations were served part-time by a pastor in 2000, and this was still true in 2019. A greater proportion of these congregations have a pastor who is paid only part-time today than twenty years ago, while a smaller proportion of congregations share their pastor with another church. A greater number of small congregations have local pastors rather than pastors with a traditional graduate seminary degree.  All of this has implications for churches, seminaries, future clergy, and the denomination’s polity. United Methodist seminaries and the denomination may need to develop more fully their alternative credentialing programs such as Course of Study to meet the pastoral needs of smaller congregations that cannot afford the compensation and benefits required for elders with seminary degrees. And those who sense God’s call to the ministry will need to be clear-eyed in their employment expectations when they graduate from seminary, recognizing that their call to ministry may be shaped by changing church dynamics. While there will continue to be needs for lead pastors and associate clergy for larger churches, solo pastors for medium-size churches, and full-time pastors who serve multiple churches, there will also be needs for part-time and bivocational pastors